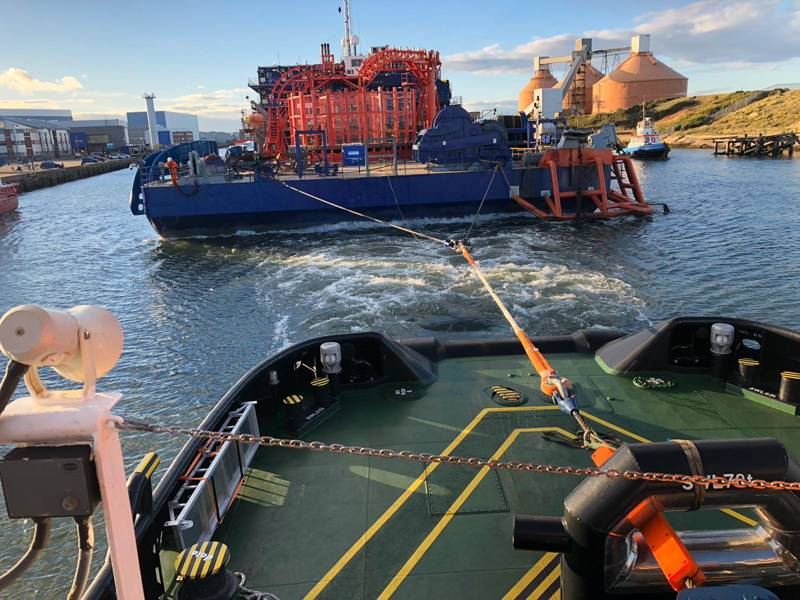 Johannsen Towage’s tug ‘Claus’ has been putting Lankhorst towing ropes through their paces over the past two years. So how did they perform?

Operating out of the Port of Hamburg, Germany, Captain Henry and the crew of ‘Claus’ provide a range of services from port and terminal operations to salvage and recovery.

“Since our company, J. Johannsen & Sohn Seeschlepp und -transport GmbH, decided to work with Lankhorst Ropes in 2018 we have enjoyed the advantages of their ropes across a range of operations, from turning heavy transport vessels on station to towing barges from the UK to Germany. On board we use several Lankhorst products including Strongline™ and Lanko®force ropes as well as the Lanko®nect soft shackle connection during towing operations,” comments Captain Henry.

The Importance of Rope Selection

“Choosing a rope is one of the first steps to operating safely and efficiently,” comments Jacco van Snippenberg, Lankhorst Ropes’ Group Lead Tug & Towing. “Within any application there are many rope properties to be considered such as elongation, floatability and service life. Lankhorst Ropes works with customers to establish their needs and make sure they have the right rope for the vessel, application, and environment. Once installed rope training ensures the crew knows how to use and maintain the rope correctly, whilst our monitoring and rope testing means we can assist in determining the right time to change the rope.”

Commenting, Captain Henry said, “All of the ropes selected with Lankhorst are really easy to handle and extremely well-suited to the tasks we carry out. As towing can be a hardwearing task, I wanted ropes that had excellent abrasion resistance; Lankhorst therefore recommended jacketed ropes.”

Jacco again, “Wearing occurs where the rope rubs against the deck machinery onboard causing friction. The jackets on our Strongline™ and Lanko®force ropes protect the rope inside from heat build-up and abrasion, ensuring safe and consistent rope performance and long service life.”

“While Lankhorst’s ropes perform very well, using Lanko®nect has had the biggest impact. My crew especially like the Lanko®nect as they no longer need to use heavy metal shackles which are harder to handle and require tools to assemble,” continues Captain Henry. “Using Lanko®nect we can construct a customised towing connection between our Strongline™ and Lanko®force ropes in a much shorter time and with less effort. We will definitely be sticking with Lankhorst Ropes!”

The Lanko®nect was developed to provide tug operators with a quicker and safer connection during towing. The soft shackle approach to tow line assembly removes the need for a cow hitch knot or hardware. It also allows tug operators to set a calculated breaking force for the tow line configuration.