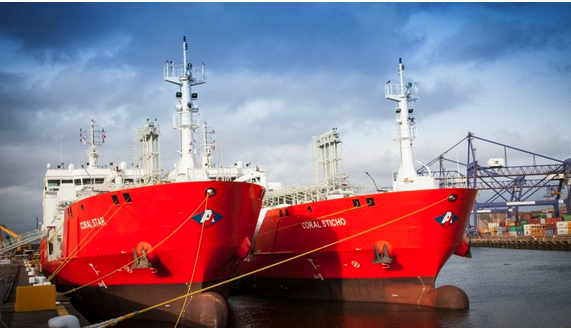 It’s four years since the introduction of the OCIMF’s MEG4 guidelines. For Anthony Veder, a leading gas shipping company, the initial steep learning curve has given way to a progressive roll-out of MEG4 mooring lines across the entire fleet with the help and support of Lankhorst Ropes. However, the full implications of MEG4 for the gas tanker operator are only now beginning to be felt.

OCIMF introduced the 4th edition of its Mooring Equipment Guidelines (MEG4) in 2018. MEG4 describes the definition of mooring, why a mooring system is essential for a vessel and which factors should be considered when making a mooring plan. It introduced the Line Management Plan for the management of mooring line and tail maintenance, inspection and retirement. The Line Management Plan (LMP) helps ship owners and operators to keep consistent information about the mooring equipment of the ship. The LMP, along with the required Mooring Rope Manual, must accompany the vessel throughout all her operational life. MEG4 also clarified terminology, replacing the generic Minimum Breaking Load (MBL) from MEG3 with Ship Design MBL (sdMBL), Line Design Break Force (LDBF) and Working Load Limit (WLL).

The LDBF is the breaking force of a mooring rope in a spliced condition and should be the same as the Ship Design MBL (sdMBL). A maximum of up to 5% above sdMBL is permitted. This narrow 5% margin is there to avoid any damage to the winches or fairleads in the event the mooring ropes become overloaded.

The LNG operator uses Tipto 8 and Tipto 12 ropes together with EuroFloat® Premium and Lanko®Force on some vessels. “Ahead of MEG4, Lankhorst has supported us through extensive rope testing to ensure they are correctly tested and documented. As our older MEG3 ropes are retired we’re replacing them with MEG4 ropes. After two years we can now produce an acceptable LMP. Also, MEG4 has helped with vessel design discussion and informed our frequent LPG Ethylene / LNG mooring line configuration studies.

“We’ve found it is best to use a single supplier to assist with mooring rope testing and stay with the same product range that meets the ship’s sdMBL. Once this is set then all the other elements such as winches and fittings can be decided. Working with Lankhorst Ropes we’ve established a standard mooring line on the vessel where we can meet 100 – 105% sdMBL and are certain that the tests and certificates provided are validated by a mandatory independent class society as OCIMF MEG4 states.”

For Wouter van der Veen, the wider effect of MEG4 has been on the mooring hardware, specifically the mooring winches and deck fittings. Under MEG4, the LDBF of the mooring rope should be equal to or less than that of other fittings. This means that winches should start to render at 60% of the mooring line LDBF. “Regular winch brake render testing and calibration should significantly contribute to safe mooring. The winch brakes should be set as the weakest point of the mooring system when conducting Brake Holding Capacity (BHC) tests.”

When specifying the mooring system for a new vessel, a stronger rope was needed which in turn has affected the mooring winch and fittings. “With the new vessel we’re seeing the full impact of MEG4. Switching to a Lanko®Force rope with its higher LDBF for this vessel means higher capacity winches and fittings are needed to meet the LDBF of 100-105% of the sdMBL.”

Industry awareness of MEG4 is now widespread. Vetting inspectors and terminal operators are now regularly checking if ropes are MEG4 compliant. Wouter van der Veen again. “Of course, crew training is essential, especially the importance of implementing mooring operation assessment, handling ropes and thinking about snap-back zones. COVID has meant training visits have been restricted, and we have relied on our crews being pro-active in taking mooring safety measures. Overall, we continue to develop our knowledge of MEG4 and look forward to the rewards of greater safety for our crews.”

For more information on Lankhorst Ropes and MEG 4, visit https://www.lankhorstropes.com/information/mooring-with-ocimf-meg4-guidelines.